Today, accompanied by the Kings Copse choir, Year Six had the amazing opportunity of singing 'Zadok the Priest' with the BBC Singers. It was an absolutely fantastic afternoon where we all learnt from the best about how to perform the song. The children were thoroughly inspired and it was a delight to see their faces as they watched the professional chamber choir perform. Goosebumps all round! 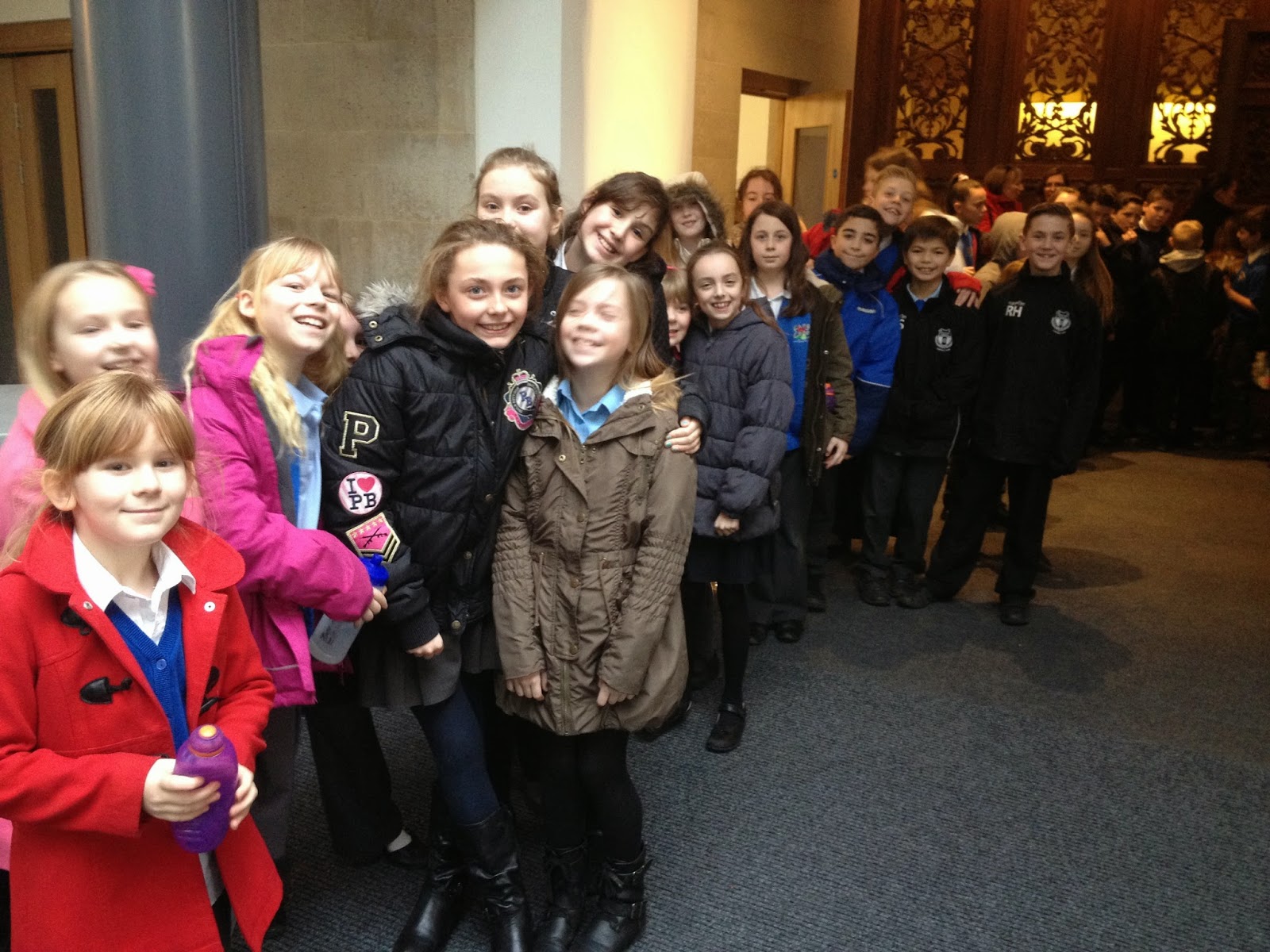 We've set ourselves a class target in Year 4 - to improve our spelling skills!

As part of learning our spellings thoroughly, we devised our own spelling games to help learn the words for the 'ay' sound. Sometimes it might have an ey, an eigh, an ai.... or even a split diagraph...an a_e!

We were really impressed with the vast array of different games that were made and it reminded us that there are lots of different and fun ways to learn spellings.

We have been looking at powerful speeches which changed the world. After watching Martin Luther King's 'I have a dream' speech, we discussed what life must have been like for different races during that time.
We could appreciate it must have been incredibly difficult, but to give us a better understanding of what it would have felt like, Miss Halton set up a social experiment.
X
Year 6 were asked to stand. One by one, Miss Halton looked into pairs of eyes and either gave us a sticker with a X on it or asked us to sit down. All children branded with a X were then asked to stack their chairs and sit on the floor.
Throughout the day, the discrimination based on eye colour continued! Non-crosses were allowed to sit on benches in assembly, eat their lunch in the classroom, write in pen and play wherever they liked. Our 'crosses' had a very different experience. They sat on the floor during assembly, lined up last, wrote in pencil, and were restricted to the bottom playground at break. At first, we all thought it was quite funny, but as the day went on, we really began to understand the unfairness of being judged on our appearance alone.
Peace at last! Once our stickers were removed, we were very relieved! There were lots of smiles as crosses and non-crosses were reunited at last. After a day full of lots of ups and downs, we discussed how different people felt.
"I felt awkward being a non-cross, because I saw how unfairly the crosses were being treated."
"I liked it at first, but then I saw how annoyed the crosses were getting and I felt sorry for them."
"I thought it was incredibly unfair! I couldn't understand why I was being treated differently to others just based on my eye-colour."
"I can really understand how awful it must have felt to be treated so unfairly. It definitely isn't a good feeling!"
We learnt an important lesson about social and racial equality, and it isn't one we are going to forget quickly!
If you are interested in where we got the inspiration for this experiment, you can watch the original here: https://www.youtube.com/watch?v=VeK759FF84s
Jane Elliot carried out a similar experiment with children in an American school over 40 years ago. It is quite old-fashioned, but parents and children might find it interesting!
Posted by Anonymous at 12:22 1 comment:

In the true spirit of Ray Mears, we investigated how we could make clear water if we were to be stranded in the wilderness. After watching a video to give us some ideas, we investigated filtering muddy water using a variety of materials.
First, we planned our investigation. We decided upon a filtering method which would include cotton wool, sawdust, and charcoal. 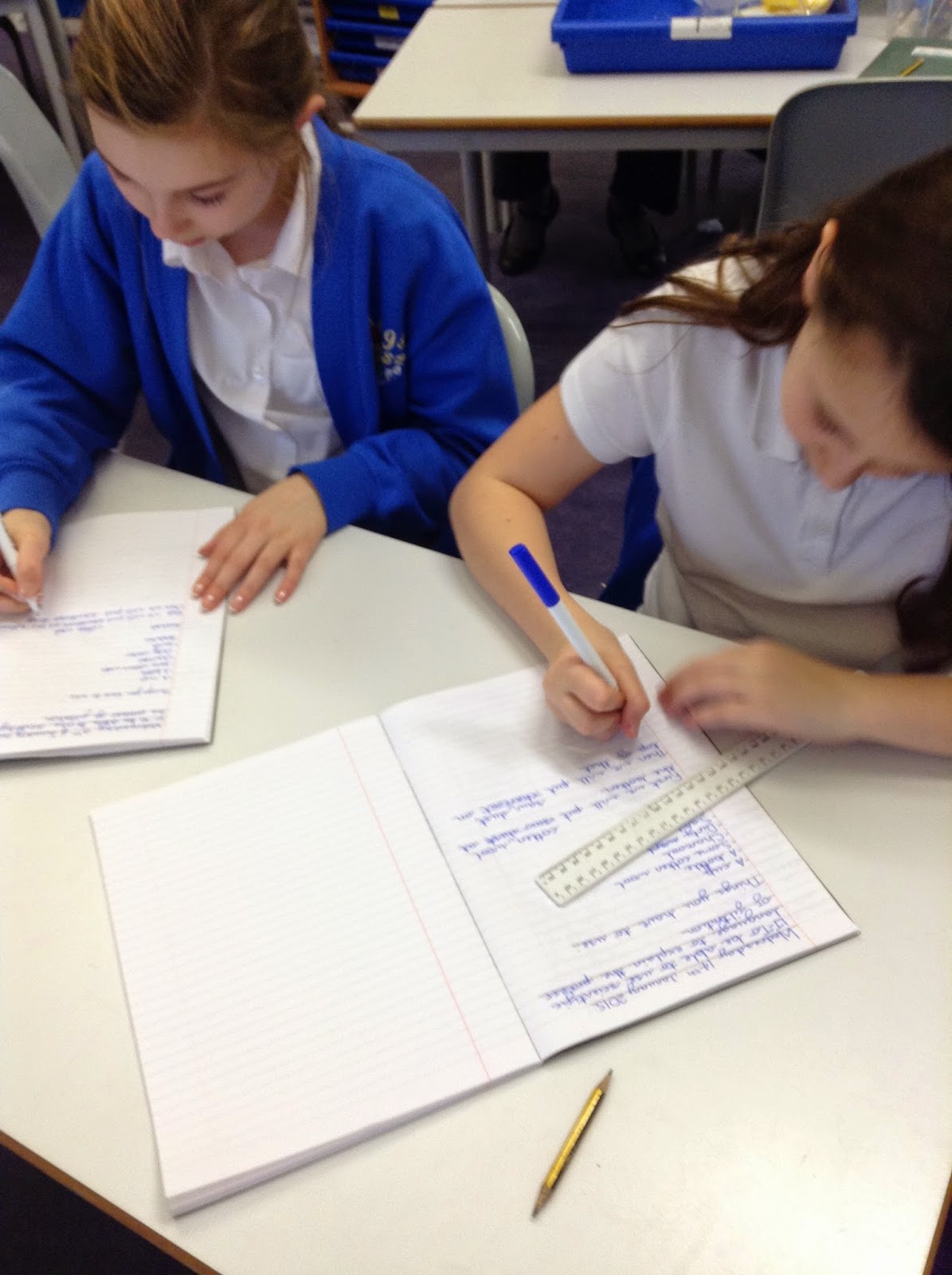 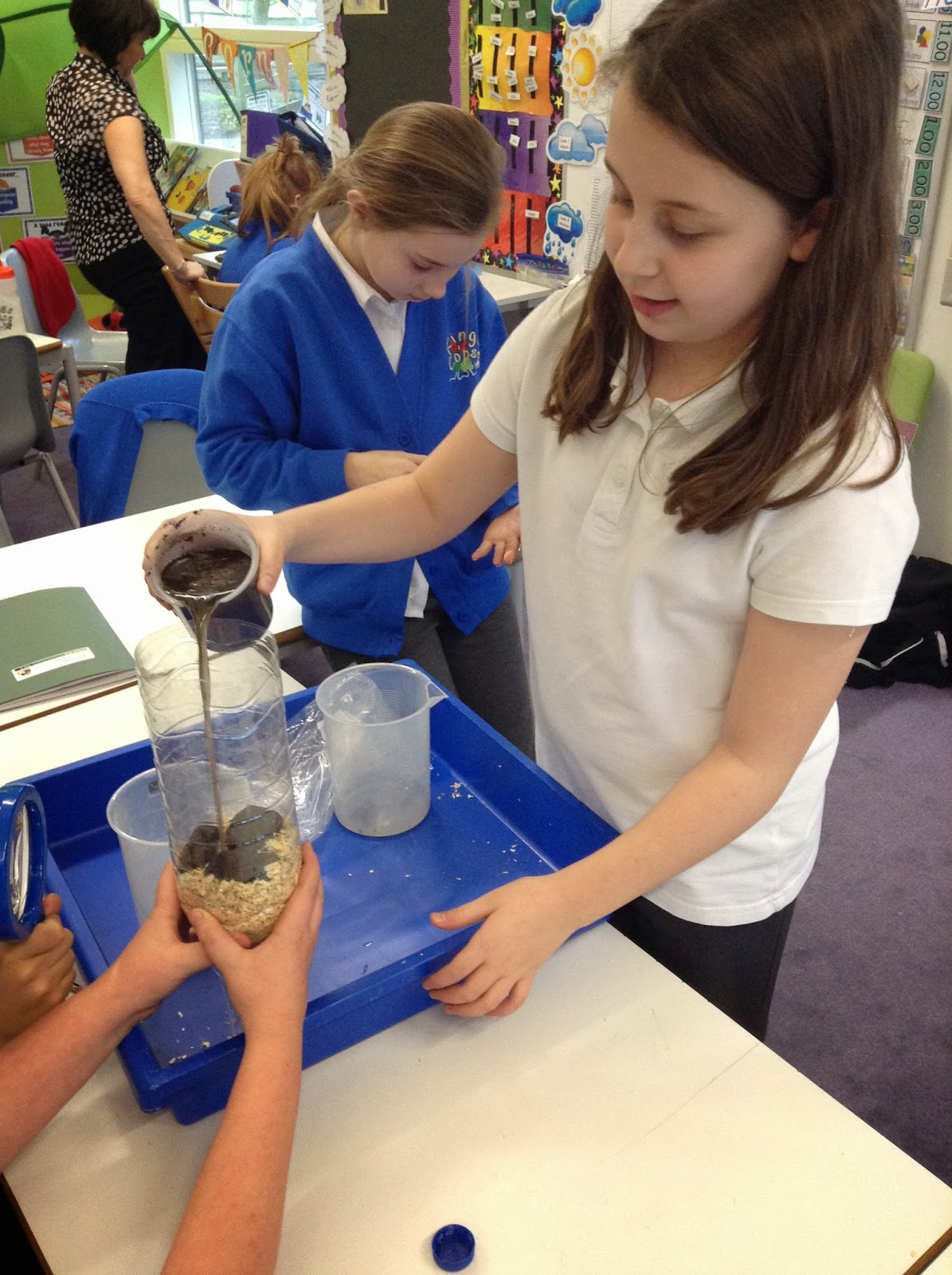 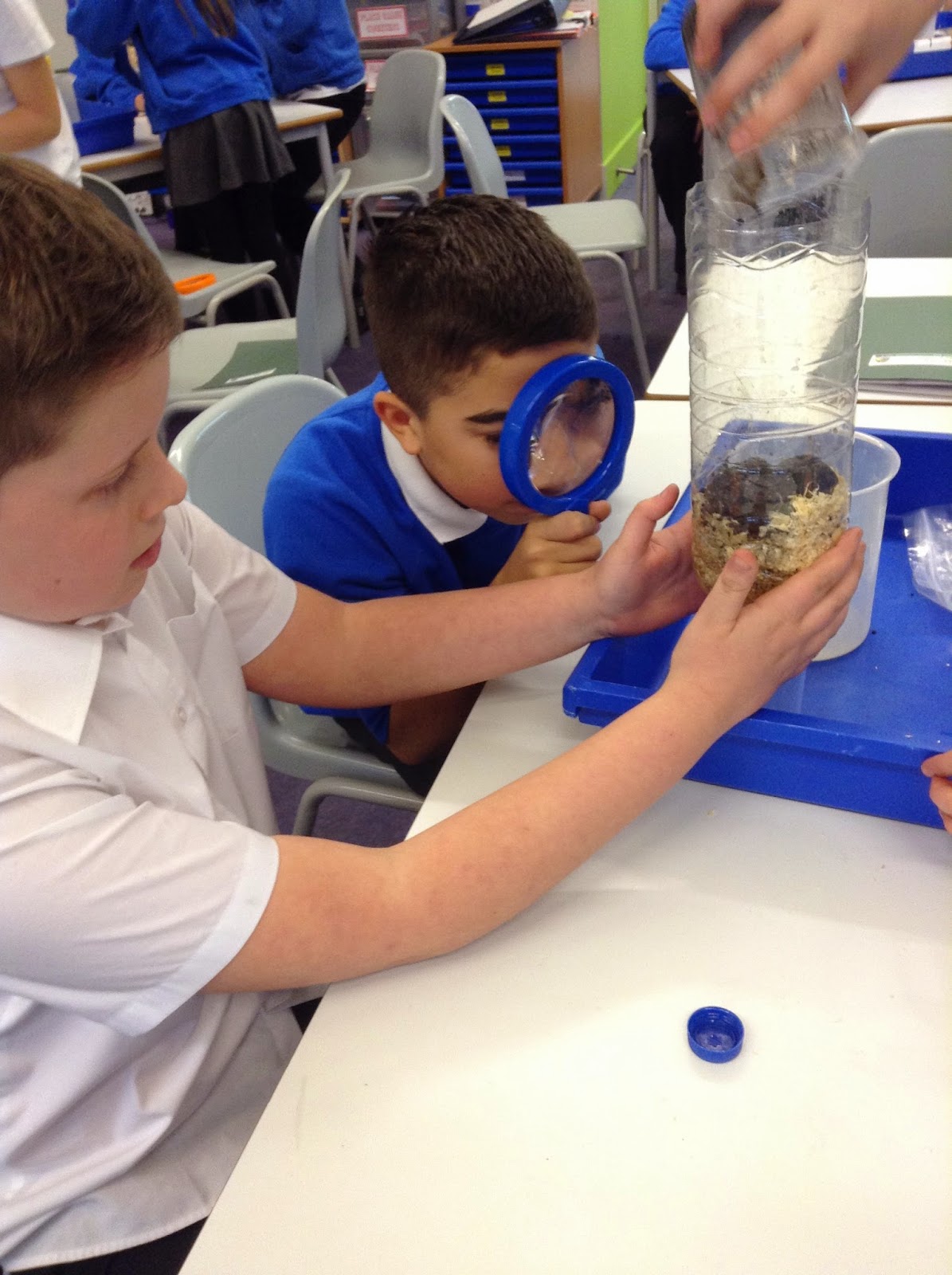 Watching the filter remove impurities from the muddy water to give us clear water was fascinating! 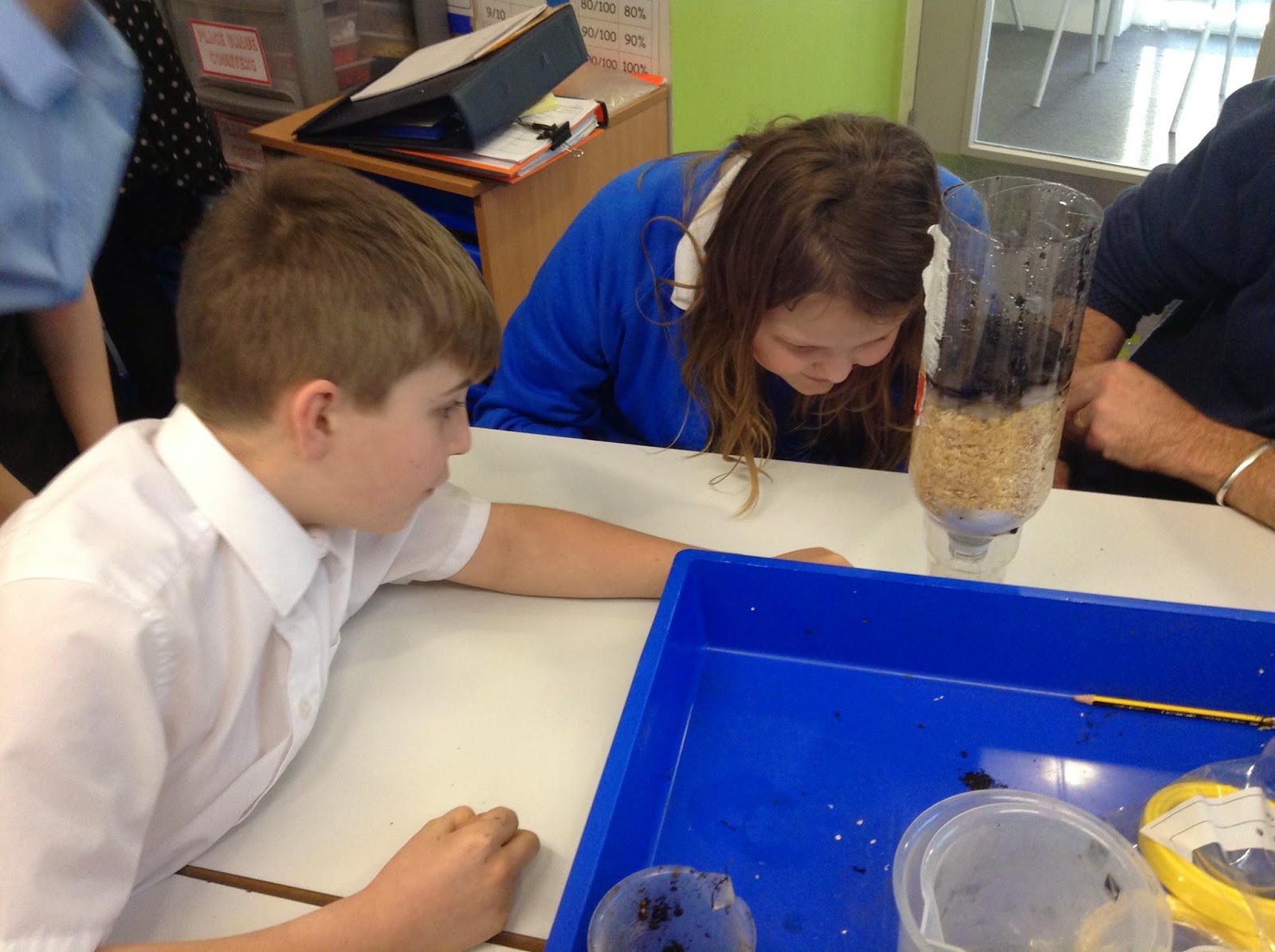 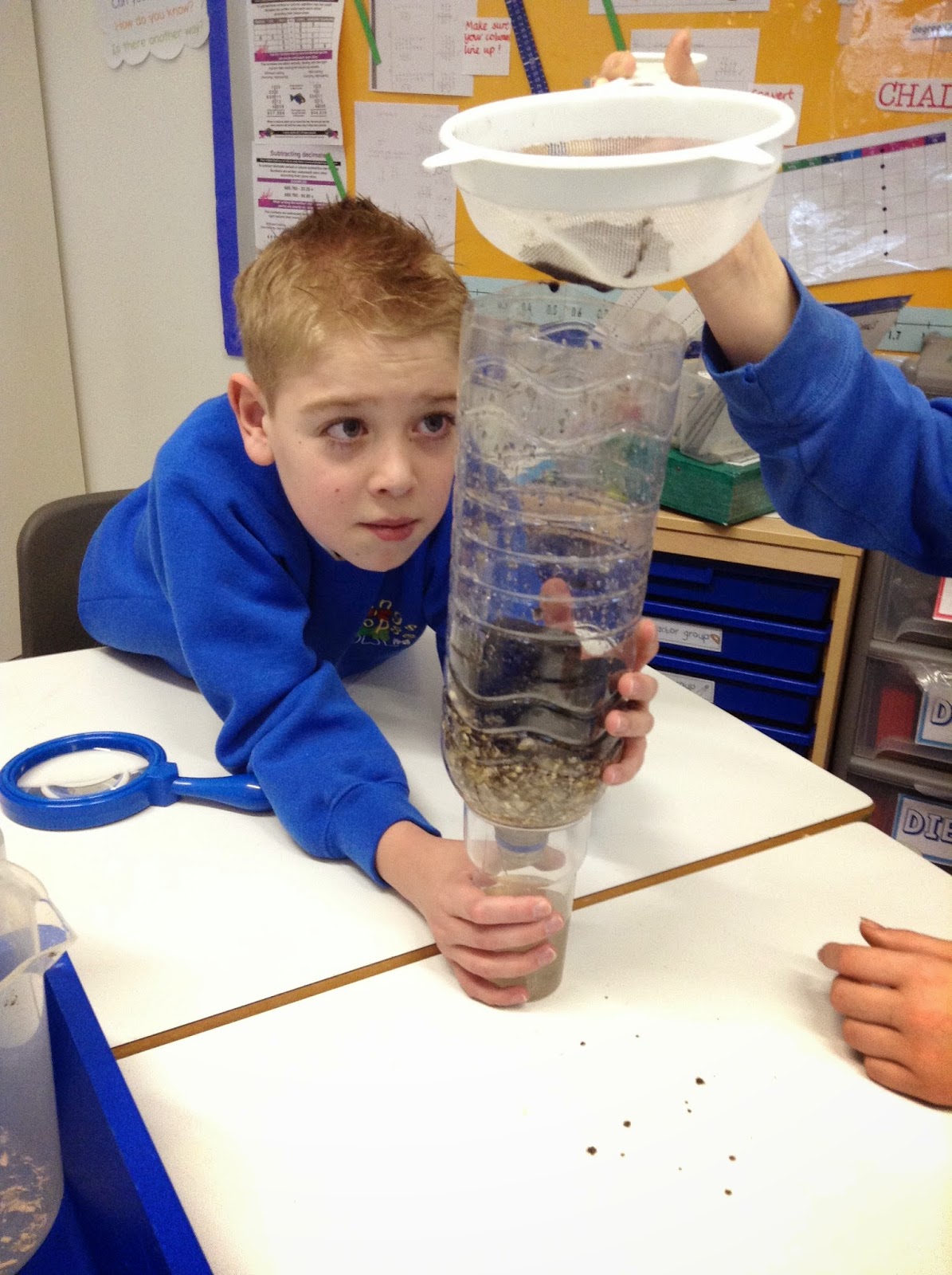 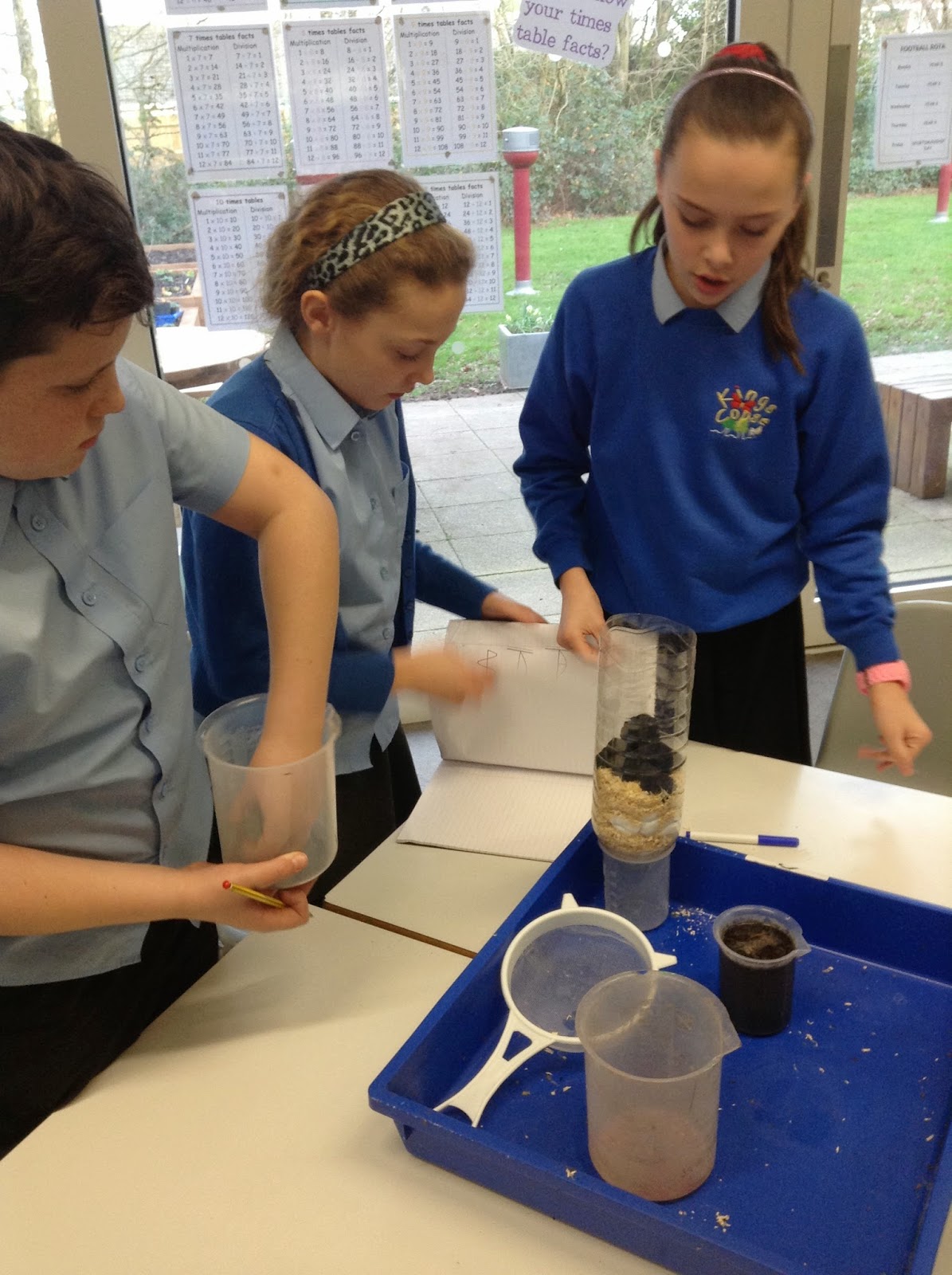 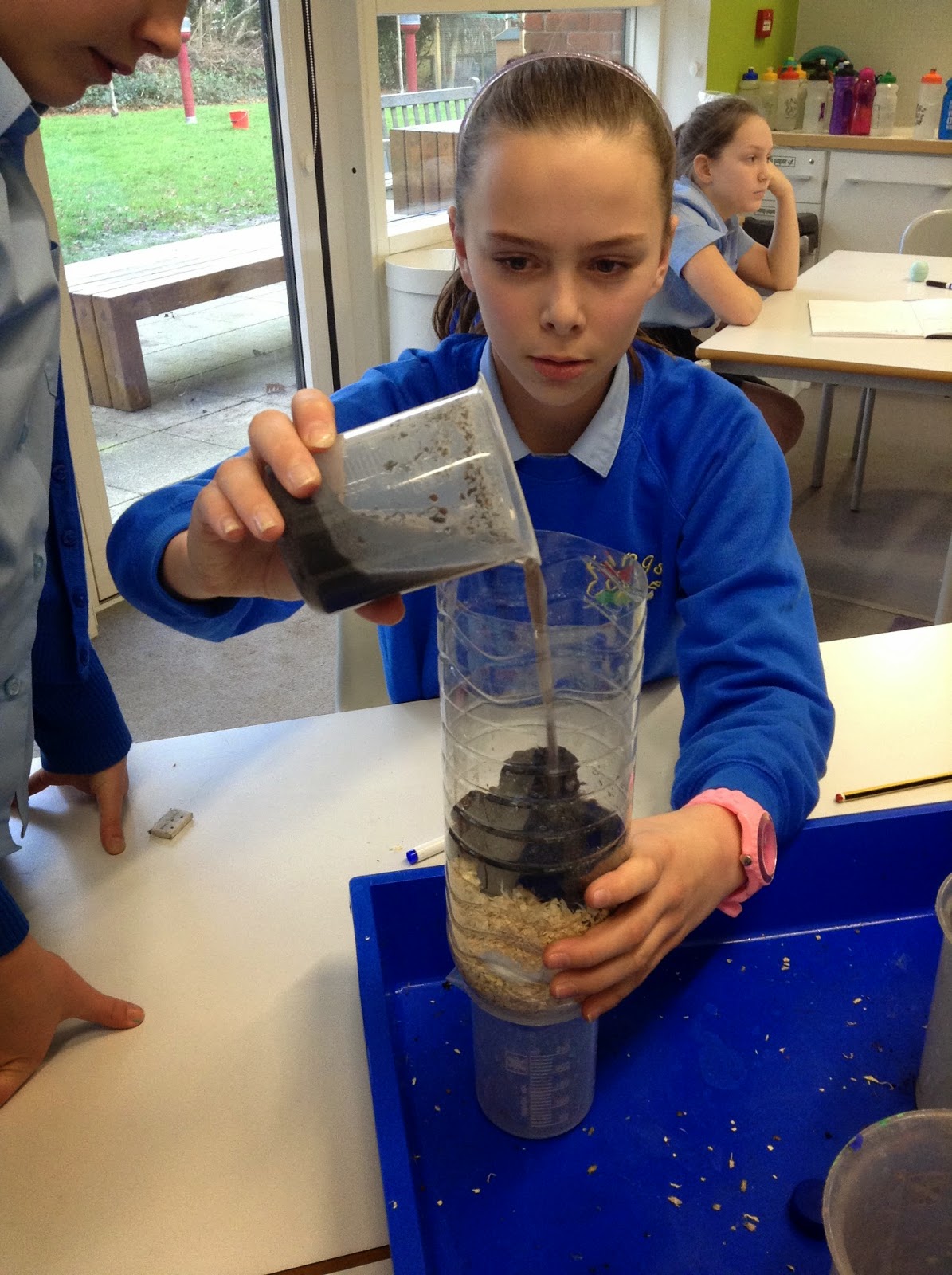 Miss Halton even tried some to prove to us it was drinkable - it tasted a bit earthy, but it was clear water nonetheless!
Posted by Anonymous at 11:58 No comments:

Martin Luther King
In Literacy, we have been looking at speeches that changed the world.  Our first speech was the infamous 'I have a dream' speech from 1963.
To help us understand the significance of this speech, Mrs Warland set up a social experiment in class.  We were asked to line up at the front of the class and were issued stickers with a blue cross on.
Shortly after, a 'No X' zone was set up in the classroom.

This meant, children wearing an X could no longer enter this section of the classroom. At this point we weren't told reasons behind the selection but later found out that children with blue eyes were the lucky few.

They even had their chairs removed.

During PE, children with an X had to get changed in the corridor without speaking and were not allowed to enter the front section of the hall.  Many of us were frustrated when, during Assembly, Mr Hayman allowed non-stickered children to sit on benches and leave first for break whilst others had to wait for the entire school to exit the hall.

Many of the boys hated being restricted to the lower playground at break time, especially when they were told they couldn't use any equipment!

Charlotte was particularly frustrated when she was told she couldn't collect her merits for times tables.

Rebecca enjoyed the privileges of having extra play, lunch with a DVD and the radio but missed her friends dearly.

Our whiteboards say it all and our faces tell the story.  By 3pm, children wearing a cross were angry that their lunch was last, and, during wet play, they were unable to play with the usual play equipment or sit in their usual seats.

Once all stickers were removed, we were jubilant! Friends were reunited, we hugged, we danced, we sang!
Today has been a day of highs and lows.  Lots of us have a much better understanding of life with social or racial discrimination and can't imagine what it would be like to spend day in, day out, week in, week out where you are unable to participate in the same activities as others.
Which side would you have been on and how would you have felt?
Blue eyes - additional treats and privileges!
Any other colour - no rights!
Posted by Anonymous at 15:21 3 comments:

On Monday our teachers told us about a hot air balloon that was about to crash into the sea unless someone jumped out.
In the balloon was a police officer, mechanic, scientist, fireman, teacher, doctor, pilot and soldier.
We had to decide who we thought would be the best person to leave.

Who would you choose? And why?

We then split into groups to create our own persuasive arguments for one of the characters.
We worked well in groups to think about why our person should stay safely in the balloon.

On Tuesday we actually held the debate in class. We had to convince Mrs Stanley and Mrs Greenwood not to choose our character to leave the balloon. Some of us were very persuasive and good at asking questions to the other groups.

Here are some pictures of us during the debate:

Who was safe? And who had to swim to shore?
Posted by Anonymous at 22:58 6 comments: